I just wrapped up a solid week of snow goose hunting in Missouri and TSS duplex loads were as good as the migration. Over 10 days, our crew killed 976 snows over decoys with a low day of 62 and a high of 181. More impressive was the performance of 3/8oz TSS over 7/8 oz steel. We traditionally use 3 inch BB steel as our go to load. Here are some of the loads I experimented with:

I used skeet choke, Improved cylinder, and Light modified. The results were consistent with what I experienced on ducks, but with even longer ranges. The challenge was figuring out lead on high wind days (30 mph plus). TSS was penetrating vitals where BB steel had already ran out of penetration. My favorite long range pairing on days the birds weren't finishing well was probably 7.5 TSS/BBB steel. It's a lopsided load with the 7.5 TSS really putting in the work. Between friends and I, we shot 500 TSS/steel duplex shells. Where steel BB's were running out of energy around 50 yards, the tungsten blend loads were retaining penetration out to 70+.

My friends started calling the loads, "The Hammer." They were killing at longer ranges and weren't crippling. Due to cost, we'd shoot BB STEEL on days they finished well/juvies and shoot TSS/steel duplex loads on days they didn't finish well/adults. All thought the duplex loads were extending usable range by 20+ yards.

Thank you Hal for all of your advice and guidance on loads.

In January we had two great goose hunting days for California. We ended up getting 54 geese on the first day and 57 geese on the second day.

I had some TSS #5 and #6 1-1/8 oz loads with me. I was shooting TSS loads and some factory Federal Heavyweight #4 shot 1-1/4 oz loads. I was sitting next to our guide so he was able to see how my loads were crushing the geese.

On the second day the guide brought out a shotgun so I gave him six of the TSS #5 1-1/8 oz loads to shoot. On a big group of specks that came in he waited until all of us had unloaded our guns and then he shot at a speck that was leaving about 50 yards or more away. The speck was stone dead as soon as the TSS #5 shot hit it.

The guide couldn't believe that a shotgun shell that didn't kick much could just crush a goose that far away. LOL 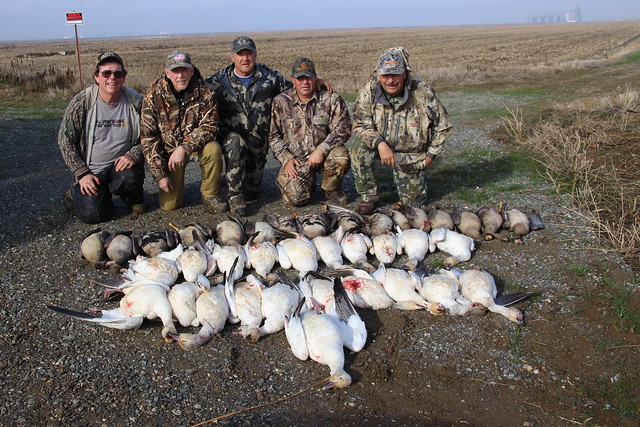 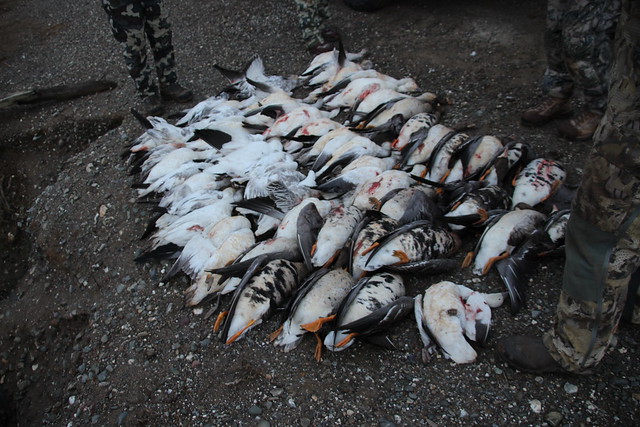 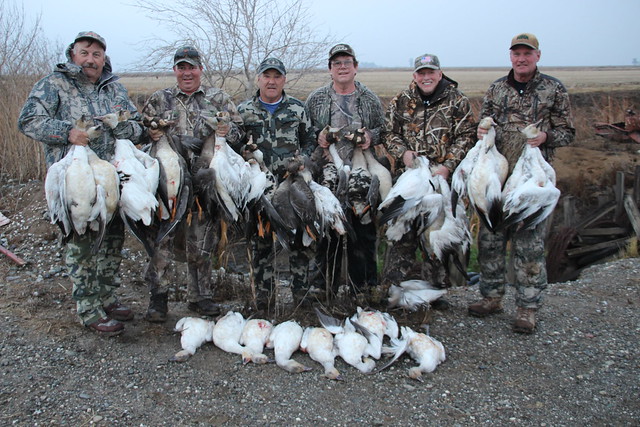 I can't wait for next year to go goose hunting again! I have a few more TSS loads for shooting at geese and maybe 20 more of the Federal Heavyweight #4 shot loads.

)! I lost my iphone the 2nd day in a 160 acre cornfield. By luck, there was no rain and one of my buddies found it my 2nd to last day, still holding a charge. I just got the pics today included in this rresponse. This year was incredible. We track birds and statistics by the day and year. Last year we killed Just over 1,100 in 28 days of hunting. Last year saw a series of snow storms with multiple reverse migrations. I left Saturday but the birds in the area have dropped dramatically since last Thursday. There's a snow storm hitting Iowa/Nebraska now and my partners are praying for a reverse migration. If they get it, they should surpass last year's total in a much shorter season. I'm done for the year.

The short well-wintered and fed 51 year old in the "snow goose partners" pic is your truly.

Sincerely,
James
You do not have the required permissions to view the files attached to this post.

as the loads you were shooting, then you said "BB steel" a few times... I wasn't sure which loads you were referring to, thinking you just used "BB" as a generic term? I'm interested in how you felt ranges and penetrations were for the 7.5 TSS/BBB steel vs. the 8.5TSS/B steel loads, and also the B vs. BBB pellets ranges? Also what was your MV for those loads?
Thanks so much for any info-- you have got to be one of the top field-reports authorities in existence for TSS and duplex on snows, I really appreciate your thoughts on this!
Dave

Thank you for all of your help and sorry for the confusion. The BB steel comments were Rio 3 inch BB all steel 1 1/4 oz. We buy them by the flat from Rogers. I used your Range Comparrison article in constructing loads and found it to be very helpful. I used the following three duplex loads of TSS/Steel:
7.5 TSS/BBB steel (7.5 TSS about equal to F Steel?)
8 TSS/T steel (8 TSS slightly more penetration than T Steel)
8.5TSS/B steel (8.5 slightly more than BBB steel?)

I would shoot 2 boxes per choke to figure out which I was connecting with best, minus human error:). On a good incoming wave/tornado we'd often get three or four volleys off. We'd shoot, lay back down and close our layout doors, reload with doors closed, and about the time we were reloaded, the 2nd, 3rd, and sometimes 4th wave would be ready. Shoot, close doors, reload, repeat. I wanted to take notes and brought a notepad but there just wasn't time. Once there was a lull, it was work dogs on downed birds, pickup empty hulls, check blinds for corn stubble concealment, and jump back in for the next group of birds working.

When the geese were finishing well, as in landing in dekes, near blinds, clone/persuaders, rotaries, and fliers, we stuck with 3 inch Rios 1 1/4 oz steel BB's. When geese started hanging up at 60-70+, a few other guys and I would switch over to the tungsten blend loads. We were killing them dead at those ranges. We shot fairly open chokes from decoy to mid-range (skeet, imp cylinder, and Light modified). For those ranges, all worked but the imp cylinder and Light Modified were the best. The 7.5TSS/BBB was the thumper of the three blended loads. I'd suspect its because the 7.5's pack more energy than the other two TSS portions of blended loads. We were killing dead past 70. When we did have sailors, they would go 60-80, rarely 100 yards, and drop out of the sky dead. We surmised only one or two pellets were hitting but due to the density, they were penetrating and reaching vitals. 7.5TSS/T Steel might be even better but I had not loaded any of that combo.

I gave my buddy Mitch a box of 8TSS/T steel and he shot a double, both dead, on the first 2 shots. Both were at 60+ yards. Mitched looked at me and said he'd never seen anything like it. He usually shoots Black Cloud BB's.
Thank you again for all your links on TSS.

I forgot to respond on the ranges part. We thought the TSS 8.5/B Steel worked well out to about 60+/- yards. That still gave us 10 yards over straight steel BB loads. The TSS 8/T Steel and TSS 7.5/BBB worked past 70 yards. I don't know how far past but all guys that were shooting them agreed they were effective past 70.
Do you have any recommendations? I'm fairly new to TSS, still learning, and open to suggestions.
Thanks,
James

What cracking report well done hard to think that little amount of tss would be so effective.

Thank you. That's the mind bender of TSS. 3/8 oz of TSS #7.5 has 80 pellets. 7/8 oz BBB STEEL has 53 pellets. So a TSS/steel load has 133 pellets. A straight steel 3 inch 12 gauge 1 1/4 oz load of BB's has 89 pellets. The TSS/steel has 50% more pellets AND further down range lethality AND stacking TSS over steel keeps the TSS to a tighter center core since it stays ahead of the steel while patterning tighter than steel. It opens up just as the steel starts to spread too thin and lose penetrating velocity. 2 chokes in one shell.
I know where part of my bonus is going this year. TSS for next year!

In California we don't have a conservation spring goose season. We do have a 5 day late goose season in February. We can't use electronic callers and our guns have to be plugged so they can only hold 3 shells.

I have to drive 300 miles North to hunt snows and specks.

When Natchez had the old Remington Hevi-Shot on close out for $100.00 for ten pounds I bought 30 pounds of #2 shot and 30 pounds of BB shot. After I sifted all of that shot over half of it came out to about size #1 shot, the rest of it was B, BB and BBB shot.

Thanks Dave and James for the information!

Users browsing this forum: No registered users and 1 guest